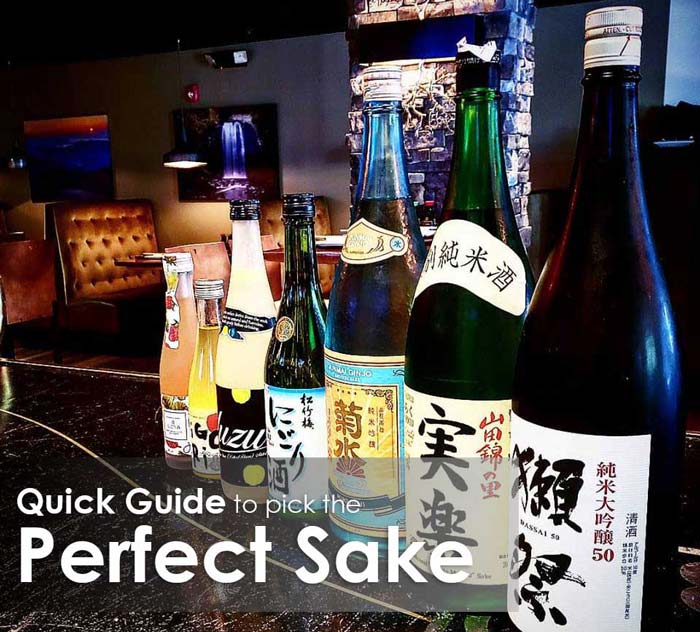 Get fully equipped to pick the perfect sake with this quick guide (Oh, and it’s not rice wine.)

At COBO, we are introducing a brand-new sake menu. Why? Because sake – despite its humble origins in grains of rice – comes in many flavor variations, and it pairs perfectly with Japanese cuisine. So for the sake of trying something new, we created this guide on sake. Next time instead of your usual wine or beer, you will be fully equipped to pick the perfect sake.

The F is for fermentation

You probably don’t think about it every time you grab some pickles, a piece of cheese or a beer, but these foods have something important in common: they all went through a fermentation process to become staple contents of your fridge. Quick history lesson: homo sapiens and fermentation go way back, about 11,000 B.C. And most discoveries were accidents: bunch of bacteria and mold, a forgotten bucket of milk and voila: it started to become cheese. Or some wild yeast, grape juice, a few days in the sun and suddenly, gosh, this juice made everyone feel somewhat joyful and wobbly on the feet. Very welcome accidents, obviously, a blessing in disguise, because where would we be without brie, IPAs, or… sake?

Ok, deep breath, and rewind to your high school science class: fermentation is the chemical transformation of organic substances into simpler compounds by the working of enzymes, produced by microorganisms such as molds, yeasts, or bacteria – sorry, say that again? Yes, it sounds complex, but think of it as a child becoming an adult, going through the teenager phase along the way, and ending up with more flavors, depth and a whole new look. The fascinating thing about fermentation is that simple ingredients such as grain, hops, rice, milk or grapes, can be turned into delicious products like bread, beer, sake, cheese and wine.

How is sake made?

Sake is the result of a process of rice fermentation, which has its roots in Japan. Stephan Sommer, Program Director of Fermentation Sciences at Appalachian State University, was more than happy to explain some more about sake for us. “Sake fermentation begins with a ‘starter’: a mix of polished rice – rice with the husk, bran, and germ removed – and Koji spores. These Koji spores are dusted on polished rice, so the enzymes can cover each grain.”

He shows an image on his laptop of rice covered in a fuzzy fur-like coat. “This batch of Koji covered rice is the starter. The sake brewers blend the starter with more rice and water, and the brewing begins. Koji enzymes break down the starch in rice, and convert it into sugar. The sugar is needed for the yeast added later: without sugars, yeast can’t produce alcohol. Yeast simply loves sugar. So when the starter, the rest of the rice, the yeast and filtered water is added, it’s time to leave it alone so the yeast can get to work.”

The Koji starter, as mentioned above, is also used for other famous Japanese delicacies such as miso, soy sauce and rice vinegar. And that’s exactly why it matches so well with Japanese dishes like sushi. Stephan: “The quality of sake is diverse and ranges from $5 bottles to bottles that cost more than $400. In general, the better sakes have more complex tones and less of a ‘burning’ alcohol flavor.” There are three main styles of sake:

Elevate your sake experience with a flight

Why should you order sake next time? Stephan: “It’s an interesting beverage because it’s somewhere between wine and beer. It has a higher gravity than beer, with very different flavors than wine. But don’t call it rice wine. Just as with beer, starches in a grain are converted into sugar and then fermented to alcohol. Sake is more of a beer than a wine. What’s also nice is that you can order a warm sake on winter days or a chilled glass in the summertime, filtered or unfiltered, fruit infused or not – there are many possible variations!”

If you’re still waking up the sake-lover in you, COBO’s sake flight is a great way to start: 4 tastings of either the traditional crystalline and cloudy sakes, or the flavor infused sakes.

Can’t wait to see what sakes we have for you to try? Check out our sake menu.

New to sushi❓ Our followers probably are not🥢

Fan of wasabi❓ Maybe you're not sure, but here i

HUGE GIVEAWAY! Eat sushi with us AND a boutique ho

When life gives you sushi its always a good day❤

This is an extra special throwback #tbt. Rioux dog

Happy Saturday sushi lovers! Make it a good one, C

COBO Updates🍣🍻🔪🔥🍷 Thank you so much

There has been a problem with your Instagram Feed.

How to Eat Sushi with Wasabi
Scroll to top